Alsace-Lorraine and the Ardennes

Our base at Lutzelbourg provides an Alsatian welcome, with its castle and its famous crystal workshops.
Whichever way you cruise, half-timbered houses gay with window- boxes, onion-domed church-towers, intricate wrought-ironwork and a hundred small details give the villages a festival air.

Wherever you stop, you'll find the food equally special: choucroute and charcuterie as well as mouthwatering plum and greengage tarts.
Cruising the Canal de la Sarre you pass mainly through woodland with the odd small town to tempt you with a restaurant meal.

At Sarreguemines, you'll be charmed by the hand-decorated pottery.
On your return, you'll travel on the boat lift at Arzwiller which replaces 17 locks.
Following the Marne-Rhine Canal, you pass through Saverne with its ducal palace and across the Alsatian plain to the heart of Strasbourg.
At Toul, a town fortified by Vauban and enjoying fine views over the loops of the river Moselle, you are entering Lorraine.
Its countryside is just as fine as its cities, of which Nancy and Metz are the high-points.

While the Canal de la Meuse takes you through the lush pastures and verdant countryside of Lorraine as far as Verdun, the River Meuse itself loops romantically into the tangled hills of the Ardennes whose forests act as a great lung for Europe.

Home of wild boar, roe-deer and some of France's rarest birds, the Ardennes forests also shelter in their protected wetlands such fancies as orchids and the fly-catching sundew.

At Sedan don't miss a visit to Europe's largest fortress, while you can discover all about marionettes at Charleville-Mezieres, the world capital of this art. If you decide to head for Belgium, you'll be struck by the very special character of the villages and towns of the Ardennes.

Protected by the mountainous terrain they have acted as a natural line of defence and have been scarcely touched by successive wars.
Close to Givet you can admire the ruins of Charlemont Castle, founded by Charles V.

The grand mountain scenery leads on to Namur and Dinant, perhaps the most lively and fascinating towns of the Belgian Ardennes. 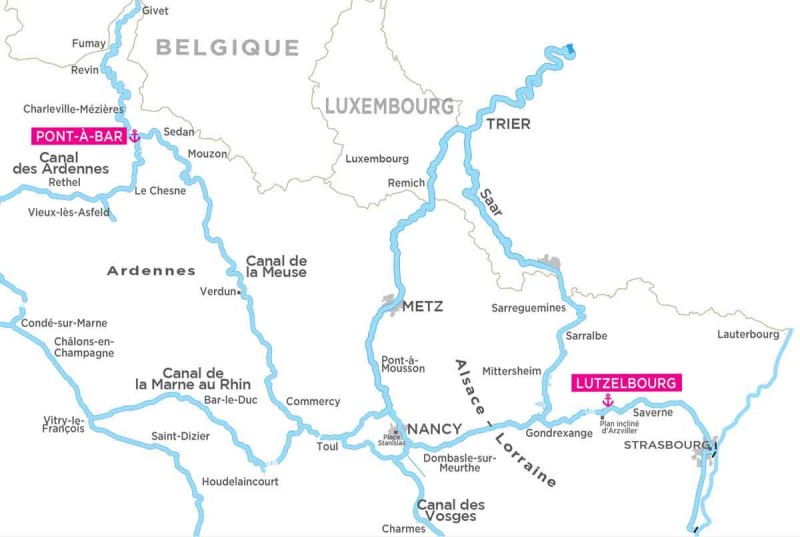 Locaboat have 14 self-drive boats available in this region View all the Locaboat fleet

Celebrating our 18th Birthday!
Open all the gifts.