How to use ropes, mooring lines and moor a boat

Now you know how to approach the river and canal banks to prepare your mooring, let us have a look at the different techniques used to safely moor the boat.

Do not moor in the following places

Once you have decided that the place where you are mooring is safe, correct and that the boat is correctly in position, you have to fix your mooring lines.

The bow is towards a weak to moderate current. 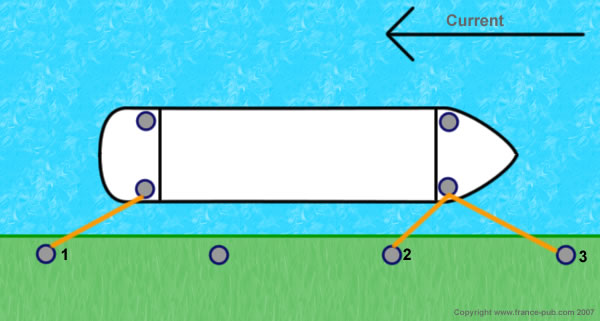 In the above situation, you have stopped the barge on line 1 or 2. The main current will help the stern in staying close to the bank. Line 1 prevents the stern from drifting out. Line 2 and 3 prevent the bow from drifting out, as the eddies which form near the bow, will tend to push the barge into the current. The only line which stops the boat from moving downstream is line 3. This is an ideal mooring when the bank is fairly steep and the barge is not going aground.

Standard mooring with a shallow bank

The bow is towards a week to moderate current. 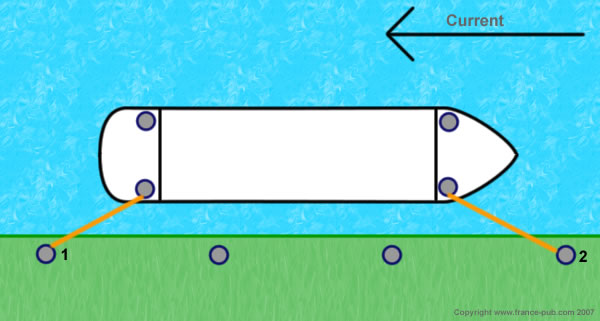 In the above situation, you have stopped the barge on line 1. The main current keep the stern close to the river bank.
Line 1 prevents the stern from drifting out. Line 2 prevents the bow from drifting out and also from moving downstream with the current. This is an ideal mooring when the bank is shallow as the two lines will act like a spring and allow the barge to drift in and out as the level of water changes. Remember the more the mooring line is placed towards the middle of the barge, the more the barge can "spring". The more the line is placed towards the bow or stern, the more the barge is held in position, as in the next situation.

Mooring with a strong current

The bow is towards a strong current. 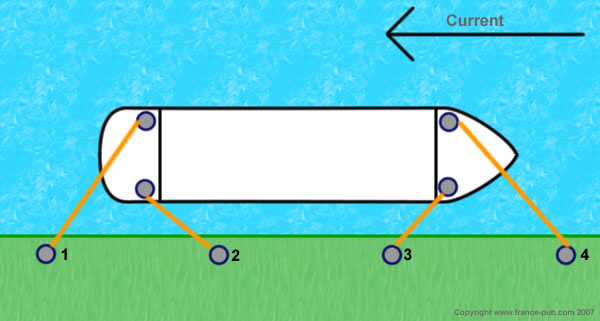 In the above situation, you have stopped the barge on line 3. Using a slow ahead to keep the barge in place, you can place line 4, which will prevent the bow from being pulled out into the current. You can then place line 2 to keep the stern to the bank. As you have placed line 4 in a manner which will pull the bow towards the bank, the stern will tend to drift out, so you place line 1 to counter this force. 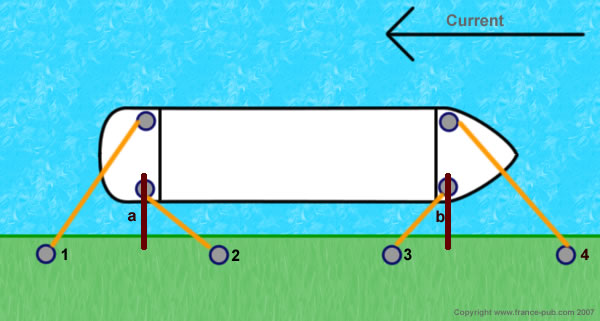 If the bank is shallow the barge will tend to be pushed towards the bank and go aground. You can prevent this using "espars" which will keep the boat at large, these are shown as "a" and "b". The espars are placed and attached on a bollard or between two bollards, once in place it is placed at an angle as in the diagram below. 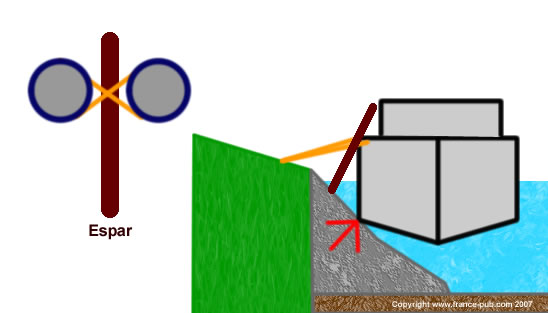 Another important fact which you should not forget concerns the current.

On the canals there is very little current, however, and this is true for the river when a lock is operated, there is a sudden movement of water as the lock is filled or emptied. This will provoke a few moments of instability in the level of water. There will be what appears to be a current which moves to and fro, eventually this movement will ease as the water levels out. At times this effect can be very strong, especially when you are near a lock, on a canal where locks are close to one another.

A similar phenomenon happens when a barge with a deep keel is cruising on the canal and narrow rivers. As the barge advances it pushes water in front however, the propellor is pushing water to the stern. This creates instability and water movement which will look like a current.

Your mooring lines will be put under strain and become very tight, pulling on the bollards ashore. It's not unusual to have badly fixed moorings ripped out by another passing boat.

How to moor a barge

Learn about boats and barges