Learn how to skipper and moor a barge with Hotels Afloat

How to manoeuver & mooring techniques for your boat

Learning to steer and handle your boat is vital. Even when the waters are calm, things can go wrong very quickly.

With just a slow current in the water, you can end up on the other side of the river or bump into another boat.
Remain alert at all times.

The tranquillity of the canals and rivers can put you in difficulty when you're pushing the boat a little too fast.

Before you do anything, you have to judge if the place where you want to moor your boat is safe; enough keel depth; not too close to locks; that you will not hinder the navigation of other boats.

The other essential factors are the strength of the current, your direction and the length of space available for your boat.

Remember that you will generally moor with the bow pointing upstream. If possible have somebody already ashore, ready to take you mooring lines, as you will not always be sure if the deckhand will be able to jump ashore (shallow waters, strong current etc.). 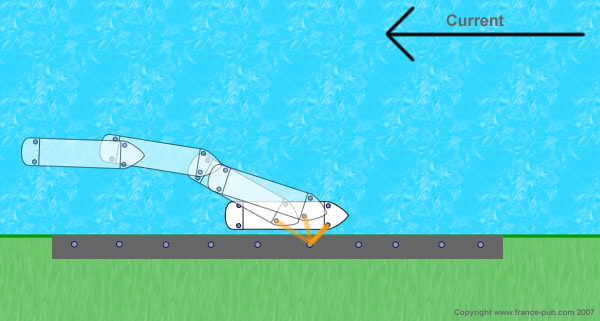 Your cruising upstream, there is not too much current. Begin to approach the mooring quay by heading for a point before the bollard you are going to use. Cast the mooring lines ashore from the bow, slow ahead. Once the line is placed on the bollard, bring up the slack on the barges bollard, the bow will automatically be taken to the quay as the line tightens, your engine should be idle at this stage.

As soon as your bow is held fast in the desired spot, slow ahead with the rudder set to bring the barge straight with the quay. The current will be held by pushing the stern towards the shore. Make fast the stern lines before stopping engines.

You usually should not moor the barge with the stern to the current, but it may be useful to know how to do this. Whenever you moor a barge coming downstream, you should always stop the boat on the stern bollard of the barge. If you use the bow, the current can quickly take the stern away from shore and put you in difficulty. Remember that as your already moving with the current, even with the main engine on idle, the boat may be moving, so do this slowly.

Slow down before beginning your approach. When you begin to manoeuvre, push the stern towards the quay. Cast the mooring lines ashore from the stern, dead engines. Once the line is placed on the bollard, take up the slack and slow the barge to a stop. As you begin to slow down the barge, the stern will tend to draw to the quay very quickly, the bow will be pushed to the quay by the force of the current. 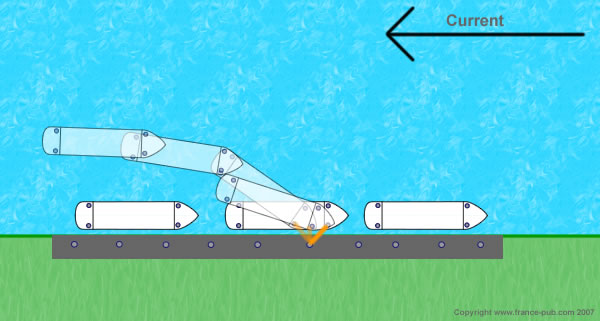 This is the same principle as the manoeuvring required for mooring upstream in the first example. The big difference is that you have less room for errors. Slow down before begetting your approach and head to the quay at a sharper angle in the first example. Get the mooring line ashore from the bow, pick up the slack and allow the barge to advance as much as possible. Once you are in position, slow ahead and use the current to bring in the stern. Straighten up and make fast the stern lines before stopping engines (if not the barge will be carried by the current and you can damage the boats behind).

Remember when the barge is at an angle to the current, the current will be pushing the bow downstream, so control your power carefully, as the effect of the barge turning will be accentuated. If things start to go wrong, do not suddenly put full-power on reverse engines, your bow is going to hit the barge behind you with a lot of force. Try and push the stern to a 45-degree angle and then use reverse engines to pull the bow away. 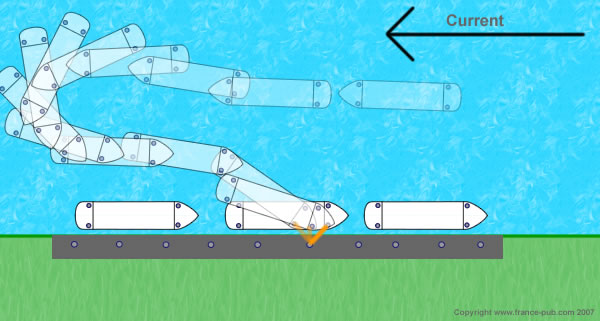 When your cruising downstream and have to moor up in a place with limited space, the best bet is to make a 180-degree turn downstream from the mooring spot, head back up streal and then moor up. In the above diagram, the barge has turned very close to the quay, but generally, you would turn further downstream. The rest of the manoeuvre is the same as in the previous example and the boat is stopped on the forward starboard bollard.

Now that the barge is moored up, let's learn how to position the mooring lines correctly.