Information about the the Briare Canal

Canal Henri IV, Loire-Seine canal, Briare canal. The oldest summit-level canal has had several names in its history four centuries old. It runs through 54 kilometres of beautiful countryside and towns. A cruise on the Briare canal is both an adventure in the Loire and Seine basins, and a journey through history.

Navigation on the Briare Canal starts at Briare and ends at Loing.

From Briare to Loing

Features and structures to discover

Named after the now disused flight of 7 canal locks.

We use links to what3words to help you discover the features.

Barges cruising on this waterway

Self-drive boats cruising on this waterway

As the French wars of religions came to end in the early 17th century, King Henri IV decided to move its capital back to Paris. The monarch, with his minister and counsellor the Duke of Sully, had vast plans to improve goods transportation, agriculture and communication roads. Aside from improving the prosperity of the realm, an objective of these plans was to better the supply of the capital city to prevent revolts. They imagined a canal joining the Loire to the Seine, then the two most important rivers of France. A local landowner and engineer named Hugues Cosnier came up with an innovative plan to cross the watershed and connect the two basins. Cosnier spent a lot of time learning geographical and engineering knowledge from across Europe that he could put to use for his canal. Influenced by Da Vinci’s locks, he invented lock staircases and, by having the canal built beside two rivers, the Trézée and the Loing, he in fact created the first lateral canal.

Construction began in 1605. Cosnier managed to overcome the difficulties he faced and created an ingenious and complex system to ensure the canal was sufficiently supplied with water. A large portion of the canal was built in 1611. However, that year, King Henri was murdered and the Duke was dismissed. The absence of support from the new government prevented the further continuation of the work. This changed in 1628 when the new finance minister d’Effiat asked Cosnier to resume his work, and the new King, Louis XIII, granted him that right. As often with the engineers building canals, Cosnier did not see his life’s work through as he died the following year. D’Effiat also died in 1632, so a group of influential financiers formed a company and were able to finish the canal that became a fiefdom. Construction ended in 1642 and the canal Henri IV became the first European summit-level canal. Goods from Lyon, Southern France and as far as Italy could be transported to Paris on the canal, a safer and cheaper route. Although the construction spanned over 40 years, it roughly took only 10 years to finish. Cosnier’s legacy was carved in the landscape in the form of several works of art such as the staircase of 6 locks at Rogny (the 7th was added later) which remains visible despite no longer being used and contoured by 5 modern locks. 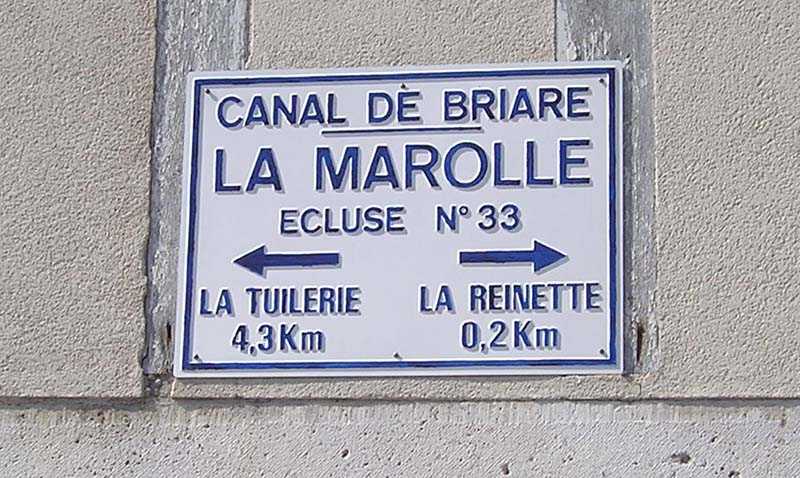 The capacity of the Briare canal was quickly found insufficient to support traffic. There were complaints about the narrowness of the canal and that it was only navigable three months a year because of the water supply. Thus, numerous improvements were made over the years. Junctions to the Loire were added to regulate traffic until the connection with the Loire lateral canal was created in 1838. In 1720, they built 5 new kilometres to the canal at Montargis to reach Buges and the Loing canal. In 1830, the Becquey program modernized the existing canals and, starting in the 1890s, the canal was adapted to the Freycinet gauge. The course was modified over the centuries, and today’s Briare canal is different from the one Cosnier and his successors built.

The staircase locks of Rogny and Moulin-Brûlé (hamlet of Dammarie-sur-Loing) are no longer used and have been replaced by a simplified lock system. The old staircases still remain visible today.

To rectify the water supply issue, a pumping plant was built on the banks of the Loire at Briare in 1895 and a total of 18 ponds can provide water. Another major change was the construction of the famous Briare aqueduct.

This masterpiece of engineering created by architect Léonce-Abel Mazoyer carries the Loire lateral canal above the Loire river, allowing an easier connection to the Briare canal. Before that, barges had to navigate on the Loire itself for one kilometre, which was difficult, longer and could be hazardous. The aqueduct is not part of the Briare canal but of the lateral canal to the Loire.

The canal de Briare is a highlight and must-see when cruising in France. It is a testimony of past-centuries ingenuity, filled with history and the idyllic beauty of the Loiret département.

Cruise regions with this waterway